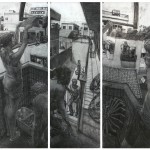 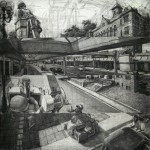 Christopher Troutman, Above Charleston and Nobeoka. Charcoal on paper. 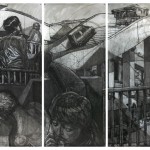 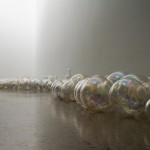 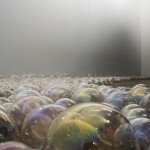 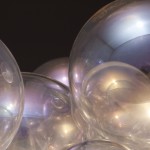 Drawing has been the basis for my most recent body of work. The immediacy of drawing materials allows me to achieve a close connection between thought and mark, as working from imagination is central to my process. I begin my drawings with a specific subject in mind or as abstract mark making on the paper’s surface over which I superimpose representational subject matter, everyday people and settings. In both approaches an exchange with the materials that I use is essential as I modify each drawing in response to unexpected developments and to the particular needs of an image: medium builds the content rather than content determining medium.

For me, drawing is an exercise in visual memory. While drawing from imagination I recombine and exaggerate aspects of remembered subjects and avoid external references until my ability to visualize falls short, at which point I resort to observational sketches and photographs to clarify forms. My drawings are large, at the viewers’ scale and larger, which I pin to the gallery wall, unmitigated by a frame, to engage the audience’s immediate space; consequently, making the process through which each drawing has evolved clearly visible and the points of view they present directly palpable.

The subjects I draw are human figures in contemporary urban environments, based on my experiences and observations living primarily in the United States’ Midwest and, more recently, southern Japan, which I amplify through mark making, intensified value patterns, dynamic compositions, and unexpected points of view: my intent is to emphasize the value and interest of daily visual experiences, as well as their value as a topic for exploration in drawing. Additionally, in some images, I juxtapose aspects specific to locations in Japan and the U.S. to highlight similarities and differences I notice while living between the two countries each year.

Stylistically, comic book art has influenced how I draw figures and spaces. It has also influenced my interest in shifting vantage points between each image and dividing compositions into multiple sections, employed to suggest the passage of time. My other influences include Edgar Degas, Edward Hopper and Robert Birmelin, as well as comic book artists Lienel Yu and Sam Kieth.

Born in Kansas City, Missouri, and raised in Peoria, Illinois, Christopher Troutman graduated from Bradley University in 2003 then moved to Japan, where he and his wife opened a conversational English School in Kagoshima City. While living in southern Japan, in 2005 he was the first foreign resident to be awarded the Grand Prize at the 52nd Kagoshima Prefectural Art Exhibition. In 2008, Christopher completed an MFA in drawing and painting at California State University, Long Beach, after which he taught at Eastern Kentucky University and Vincennes University, and since 2010 he has taught at Eastern Illinois University. Christopher Troutman has had solo exhibitions at the galleries of Bradley University, Tennessee Technical University, and the Cedarhurst Art Center, as well as other venues in the U.S. and southern Japan. Additionally, his artwork has been included in the Bradley International Print and Drawing Exhibition and Manifest Gallery’s International Drawing Annul.

10,000 Breaths is an installation of thinly blown glass iridized to resemble soap bubbles; a fascinating spectacle experienced by every child. These elusive forms are highly reflective, encapsulating everything around them caused by the lenses created on the spherical surface. By making these soap bubbles out of glass, I am offering them to the viewer in a new light. My installation lives on the floor where bubbles normally disappear adding a sense of permanence to something predictably so temporal.

My glass bubbles glisten and shimmer in the same way as soap bubbles that one might find in the bath or at the end of a child’s bubble-blowing wand. The array of different sizes forms a nice curve reminiscent of a wave creating conscious energy in a fleeting moment. A single bubble might disappear on its own because it has a certain invisibility being made of a material that is clear to the eye. As an accumulation they create a carpet that one may be tempted to walk through Rainbows of color radiate from each one like a prism as each one has a glowing presence of different luster and color than its neighbor.

By making such an impermeable object out of glass, I am using the soap bubble to symbolize life and the human experience. The bubble becomes a metaphor for the fragility and permanence on our life on this Earth. When a breath of air is blown into a bubble on the end of a bubble wand, its life begins. Although it is a short existence, it travels until it is . The breath is the most important factor in both the soap bubble and is as well in the body. Once the air is gone the subject has vanished with it.

Nadine Saylor graduated from the New York State College of Ceramics at Alfred University in 2007 with her MFA in Sculpture Dimensional Studies. She became an Instructor at Bowling Green State University in 2008 where she has taught glassblowing and glass casting. She has taught workshops and given lectures internationally, at The Studio at Corning Museum of Glass, Penland School of Crafts, and the Pittsburg Glass Center. She has won many awards for her work including Glass Artist of the Year by the Art and Design Consultants in Cincinnati. She has been a visiting artist at Neusole Glassworks, Kent State University, and the Glass Pavilion at the Toledo Mueseum of Art. Her work has been featured in the August 2011 edition of Ohio Magazine among others. She is currently represented by Marta Hewitt Gallery in Cincinnati and is currently exhibiting with the Thomas R. Riley Galleries at SOFA Chicago.