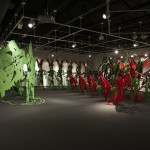 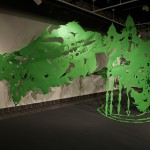 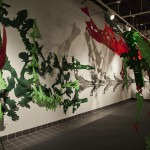 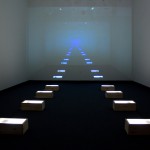 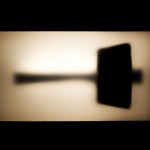 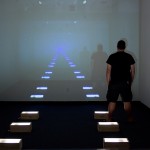 My mixed media installations and drawings re-contextualize simplified shapes, signs and symbols from disparate historical and contemporary imagery to create abstract fictions. Existing forms from a multitude of sources are co-opted, altered, and spliced to adopt hybrid identities. Through the process of appropriation and subsequent recombination, shapes lose their real-world connotations and take on fictitious roles. Forged relationships between benign and malignant forms confuse the original implications of each while revealing the precariousness of perception and how easily it can be tampered with. Recent projects pit pattern and ornament against forms derived from armor and weaponry. Seemingly oppositional pairings create duplicitous environments where conflicting messages are conveyed. The use of felt, foam, and other tactile materials further complicates questions of source, masking the identity of forms while allowing them to inhabit both sculptural and two-dimensional space.

Liz Miller earned a BFA from Rhode Island School of Design and an MFA from the University of Minnesota. Miller’s mixed media drawings and large-scale installations have been featured in solo and group exhibitions throughout the United States and abroad. Recent exhibitions include venues such as 1708 Gallery (Richmond, VA); The Gallery of Contemporary Art, University of Colorado-Colorado Springs; Haas Gallery, Bloomsburg University (Bloomsburg, PA); and the Minneapolis Institute of Arts. Miller has received awards for her work, including a Jerome Foundation Fellowship, two Minnesota State Arts Board Artist Initiative Grants, and a McKnight Foundation Fellowship. Her work has been reviewed in Art in America, Time Out London and is included in two books: High Touch Visuals (Gestalten, 2007) and Nature: Inspiration for Art & Design (Monsa, 2008). She has taught at MSU since 2005, where she is currently Associate Professor of Drawing/Foundations.

I mine and remove things from personal history and familial narrative. I subsequently place them in a setting that redefines them as precious relics, art objects, or both. This action posits the politics of memory, history, and our identities after we are gone. I experiment with an object’s context (or lack thereof) in an effort to seek where the object’s voice meets the voice of its viewer, if at all. The imbuing of meaning in an artwork is parallel to the imbuing of memory in objects. Art is fundamentally linked to mortality, and complicated by that relationship.
“At the origin of painting and sculpture there lies a mummy complex. The religion of ancient Egypt, aimed against death, saw survival as dependent on the continued existence of the corporeal body” – Andre Bazin, The Ontology of The Photographic Image

Born in Panama City Florida during the summer of 1981, Stephen Eakin received a B.F.A. from University of the Pacific in Stockton, California, and an M.F.A. from the University of Minnesota, Minneapolis in 2007. He returned to Stockton to teach as an Adjunct Professor at University of the Pacific, Sacramento State University and American River College in Sacramento. He has exhibited video, film, installation, and sculptural projects in Minneapolis, Reno, Berkeley, Sacramento, Stockton, New York City, Kalamata, Winnipeg, and Texas. He is currently working with the Brooklyn based arts collective Non Solo, and has an upcoming two person exhibition at the AC Institute in Chelsea this coming January. He currently resides in Brooklyn, New York, and is a resident artist at Hunter College in Manhattan.