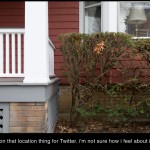 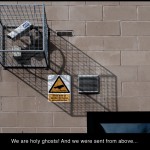 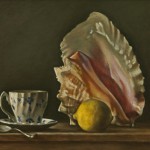 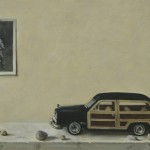 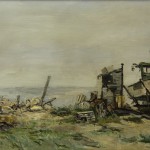 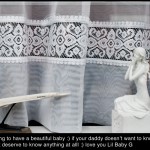 We use publicly available embedded geotag information in Twitter updates to track the locations of user posts and make photographs to mark the location in the real world. Each of these photographs is taken on the site of the update and paired with the originating text. Our act of making a photograph anchors and memorializes the ephemeral online data in the real world and also probes the expectations of privacy surrounding social networks. We select texts that reveal something about the personal nature of the users’ lives or the national climate, while also examining the relationship to physical space and the ways in which it influences online presence.

Twitter estimates there are over 50 million tweets daily, creating a new level of digital noise. Clive Thompson uses the term ambient awareness to describe this incessant online contact in his New York Times article, “Brave New World of Digital Intimacy.” According to Thompson, “It is. . . very much like being physically near someone and picking up on his mood through the little things he does — body language, sighs, stray comments — out of the corner of your eye.” Our collaborative work is a means for situating this virtual communication in the physical realm. We imagine ourselves as virtual flâneurs, ethnographers of the Internet, exploring cities 140 characters at a time through the lives of others.

Nate Larson and Marni Shindelman’s collaborative work focuses on the cultural understanding of distance as perceived in modern life and network culture. Our projects were recently featured in the Utne Reader, Flavorwire, Frieze Magazine, the British Journal of Photography, the BBC News Viewfinder, and the APM radio program Marketplace Tech Report. Our collaborative work was shown in solo exhibitions at the Contemporary Arts Center Las Vegas and the Marks Arts Center in California. Selections from our projects have been shown at the Houston Center for Photography; Baltimore Museum of Art; the 2nd Moscow International Biennale in Russia; RAIQ in Montréal; Peloton in Sydney, Australia; the Center on Contemporary Art in Seattle; City Without Walls in New Jersey; and the Conflux Festival in NYC. The Museum of Fine Arts Houston recently acquired one of the photographs from the project for their permanent collection. We recently completed site-specific GEOLOCATION series for the Format International Photography Festival in Derby, UK and Third Space Gallery in Saint John, New Brunswick.

Nate Larson is faculty at the Maryland Institute College of Art in Baltimore and serves on the Board of Directors for the Society for Photographic Education. He received his MFA from The Ohio State University in 2002. Marni Shindelman is Associate Professor of Art and an associate of the Susan B. Anthony Institute for Gender and Women’s Studies at the University of Rochester. She received her MFA from the University of Florida in 2002.

I turned to realist painting after completing my MFA at the University of Iowa in 1969. It was the culmination of an effort to move beyond what I perceived to be impasses in the traditional modernist approach to painting. I had been painting the figure from memory, in an expressionistic style, and I discovered that the abstract, formalist qualities I sought could be better achieved painting directly from life. In doing so, I felt paradoxically freer, whether painting a model, working from a landscape without reorganizing the subject matter, or working from a carefully constructed still life.

I grew up in the artists’ community of Woodstock, New York–my mother painted portraits and my father painted mural commissions for the Federal Government projects during the Depression. I had watched my father’s work turn increasingly abstract during the late 1940s, and I had admired the abstract work of the New York School painters, like de Kooning, Kline, and Guston, but I had no interest in emulating their styles. I recall discussing my early figurative efforts with Philip Guston in the late sixties at the time he was developing his own return to figuration. He praised the “mannerist” quality of my figures in landscape, and told me his own new work was full of people interacting violently. When I first saw this work in 1970 the effect was powerful and liberating. Another mentor was Robert Kulicke, whose small still life paintings made a strong impression on me, and who taught me frame design, construction, and finishing techniques, as well as his concept of “eclectic framing”–the use of historical designs in conjunction with contemporary work. Kulicke taught me to see a painting as extending to the outside of its carefully chosen frame.

My earliest realist efforts were large-scale environmental portraits, and I became fascinated with the still life compositions that spontaneously arose from the settings of these portraits. I was particularly drawn to the narrative potential of still life painting, and I discovered these narratives could be contemporary and not just a reflection of nostalgia for the presumed values of a vanished past. My principal focus has been still life ever since. While I have repeatedly returned to landscape, most particularly during one summer in Vermont and three summers in Italy, I view landscape as pure, reflexive painting–my most abstract work, while still life offers me the greatest conceptual challenges. My five major one-person exhibits reflected this balance: two at A. M. Adler Gallery in New York City, Amherst College Mead Art Museum, Nancy Beers Nix Fine Art in Charleston, West Virginia, and Fletcher Gallery, in Woodstock, NY.

In my opinion the realist painter’s most important subject is painting. The ostensible subject matter is a means to an end, and the relationships in a contemporary painting, to retain the viewer’s interest, must transcend simple allegory. A lemon may have symbolized transience in a Dutch still life, but in my work it can play a variety of formal and domestic roles, in addition to being a code for the 17th century. The same objects recur in my work again and again, in different roles, and the table becomes a stage, or, in postmodern terms a field of signs and signifiers. The ability of the object to refer to contemporary life as well as the history of painting makes the still life format an especially rich one for me, filled with shifting meanings.

I work in oil on panel or canvas. I prefer to work from life, as the nuances of light captured by the human eye exceed the capability of the single photographic frame. I find this facilitates a more painterly approach, which I prefer to the uninflected brushwork of photorealism. In the past few years, however, I have renewed my interest in photography, and I have been exploring ways that digital photography, with its potential for subtle color adjustment, can be used to support my particular manner of working. My studio has the traditional cool north light, creating the rich umber shadows of the old masters, but I often choose to combine this light with incandescent lighting at times in order to produce sunlit effects. I adjust my palette accordingly, ranging from a limited range of earth tones of a seventeenth century Dutch monochrome still life to the rich, blue-laden chromatic tones of an Impressionist like Pissarro. My work is usually small in scale, occasionally reaching sizes above 12″ x 16″ and 16″ x 20″, as I like the intimacy of a small painting as well as the enhanced visual weight of the individual objects. The means of representation are also more apparent in a small picture; the individual brushstroke counts for even more, as does the frame that completes the piece.

Peter Jones is a second-generation Woodstock, New York, artist. His father, Wendell Jones, painted murals for the U.S. Treasury’s Section of Fine Arts program during the Depression, and went on to teach at Vassar College, while his mother, Jane Jones, specialized in portraits. He earned a degree in fine arts from Amherst College and studied art history at the Institute of Fine Arts, New York University, before transferring to the University of Iowa, where he received his M.F.A. in painting. He began his teaching career at Sullins College in 1969-73, and spent seven years as art director of Vermont Life Magazine before returning to teaching at Louisiana Tech University’s School of Art, where he retired after thirty-one years as Professor Emeritus. He has exhibited his paintings, primarily still lifes and landscapes, in national shows and in one-man shows in New York, West Virginia, Virginia, South Carolina, and Louisiana.